Today the Mail on Sunday have published an inflammatory article attacking the outreach to women outside abortion centres which Good Counsel and other groups are involved in.


This will be the launch of a spectacular media campaign, inspired (orchestrated?) by BPAS to encourage MPs to back a new buffer zone bill (the aim of BPAS’ #Backoff business initiative to prevent women backing out of abortion when they are offered help by pro-lifers). Last year a small number of MPs backed efforts to bring in “Buffer Zones” round abortion centres.


So, backed by the most biased research team ever (Dr Pam Lowe, darling of Abortion Rights and Dr Graeme Hayes of Aston University) BPAS will now re-launch this campaign with the help of Keir Starmer, MP. 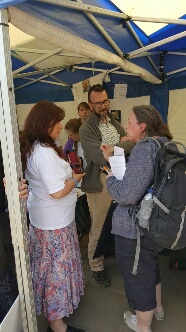 Dr Pam Lowe of Aston University speaking to Paul Tully of SPUC and Clare McCullough at the March for Life in May. Despite agreeing to do so, Dr Lowe and her colleague Dr Graeme Hayes have repeatedly neglected to respond to our invitation to speak to women who accepted help  from us outside abortion centres. Yet her research on Pro-life Vigils is used to promote the Buffer Zone movement


To help them do this, their favourite media chums (Channel 4, The Guardian and now the Mail on Sunday) have left no stone unturned.


Since February 2016, Good Counsel, 40 Days for Life and Abort 67 have had a selection of undercover ‘journalists’ on their tails. These ‘journalists’ have made a series of spectacular new discoveries:

Yes. I am afraid it’s all true.


What is not true however is that we harass, shout at, follow or film women going to abortion centres. This is one lie that has been repeated so often it is now “fact” to the general public.


Unfortunately the Mail on Sunday and the Channel 4 Dispatches Programme (this Wednesday, 5th October 11pm) as well as Aston University’s Research team refused to accept our offer to speak to any number of the 100’s of Mothers who have chosen life after accepting Good Counsel’s help outside an abortion centre; the very women who could tell them everything about what we do and don’t do, if they really wanted to know.


Please read and watch these and other reports on pro-life witnesses at abortion centres over the next few days and write in demanding that these women get their chance to speak.


There will be many important updates on this story from Good Counsel, so follow us on Facebook and on Twitter  Send us an email asking to receive updates
info(at)goodcounselnetwork.com Don’t miss the next part of this ongoing attempt by the abortionists and their media stooges to stop pregnant Mothers receiving the offer of help and alternative to abortion that so many of them want.
www.goodcounselnetwork.com
Good Counsel at 01:33