The British Pregnancy Advisory Service (BPAS) are closing down their Abortion Service in Bedford Square at the end of June. 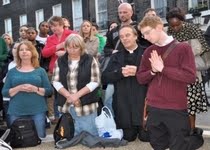 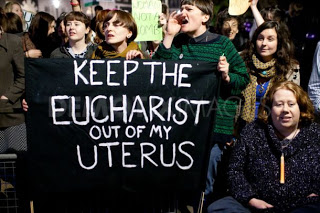 Some of the pro-abortion protesters at the Vigil.

It was at this Bedford Square Abortion Centre that "40 Days for Life" held prayer vigils twice a year over the last three years, and where they held an evening Vigil attended by Bishop Alan Hopes, which was protested in a rather aggressive fashion by Bloomsbury Pro-Choice.

This BPAS Centre has had a vigil - following the Helpers of God's Precious Infants approach -outside it for the best part of 13 years at least. I first remember it being manned by Christine and Lucy, and then after Christine left London, Lucy, Sarah and Matthew. The amazing Lucy travelling down week after week, year after year, from Oxford to keep that vigil going. Lucy remembers joining the vigil in about 2001 and says when she came there were some Catholic students, Lisa, Edoardo and Clem, living locally who were already running a vigil there.

Later on Josephine Quintavalle organised a service of Remembrance for the children who had died at Bedford Square, where - if memory serves me correctly - participants wore black and stood silently, praying for the lost children.

In December 2005, impressed by the commitment of the Saturday vigil participants and their on-going struggle to offer women alternatives, we ran a 9 day novena of prayer at the same abortion centre, ending on the Feast of Our Lady of Guadelupe, 12th December. As well as providing a constant prayerful presence while the abortion Centre was open, we offered alternatives to women entering.


Prayer volunteers at the 9 Day Novena at Bedford Square,
including Fr George Roth FMI and Fr Stephen Langridge
﻿
One young woman, a lapsed Catholic, was entering BPAS during this Novena of prayer, on the Feast of the Immaculate Conception, 8th December, when Fr Martin Edwards arrived there. She stopped and spoke to a volunteer from the Helpers of God's Precious Infants, who brought her to speak to Fr. Edwards. Just after that, Bishop Longley arrived, he was attending the Novena on behalf of Cardinal Cormac Murphy-O'Connor.
The young woman then came and spoke to him. She said "I asked God for a sign if He wanted me to keep my baby, but I told Him it had better be a big one, or I won't be sure!". We assured her that Bishop's don't go to abortion clinics everyday, and she accepted this as her sign from God. She decided to keep the baby, which she did, with offers of help from us. She later came back and offered help to other mums who come to our Centre.

During that Novena of prayer, 21 priests attended the Vigil at BPAS Bedford Square.
On one of the days, Aracely, a Mexican volunteer, dressed as Our Lady of Guadelupe and acted out her story for a group of children who attended the "Children's Advent Witness to Life" which was held on a Sunday, while BPAS was closed. 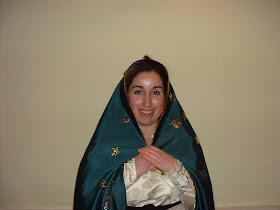 Aracely dressed as Our Lady of Guadelupe﻿


On the final Sunday of the Vigil, Fr George Roth came in procession to BPAS, with the Blessed Sacrament, and gave Benediction to all present on the wide pavement in front of BPAS.

Fr Alexander Sherbrooke spoke at the closing Mass about the two parishes he has served in as a parish priest having an abortion centre in them. He offered the Mass in thanksgiving for the closure of the abortion centre - this was a gesture of faith from us all that God would close it down.

Since then a Saturday Vigil has continued at BPAS, several "40 Days for Life" campaigns have been held there, and Good Counsel has also started a regular weekly Vigil there on Tuesdays and Wednesdays, which we have asked the Holy Family Sisters of the Needy to run. It has been a great blessing to have religious sisters in their habits bearing witness to life there. 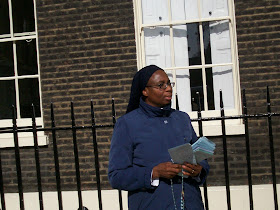 Sr Chinedum of the HFSN offering support at the vigil - Sr attended regularly for years, in all weather, many times completely alone in the early days, tolerating repeated physical and verbal harassment while assisting scores of women to find real alternatives to abortion.﻿ 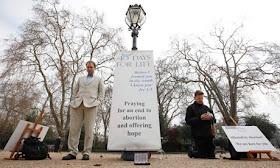 One of the early "40 Days for Life" Campaigns in Bedford Square.﻿

During the last 40 Days Vigil, The Catholic Chesterton Society promoted a campaign of prayer for the closure of an Abortion Centre in England and Wales during the September-November 2012 "40 Days for  Life" Campaign. You can download their prayercards here.

We are still financially supporting a number of women who have turned around from this particular Abortion Centre as well as others around London. We have recently had to pay quite a large amount of money for repairs to a flat where one of the Mothers and her children live. Please support our on-going work by donating here .

Not far from Bedford Square outside Marie Stopes Abortion Centre, 108 Whitfield Street, W1T 5EA we have a daily vigil 8am-5pm Monday to Friday, please come and join us in prayer.

We also have a prayer vigil outside the Marie Stopes Abortion Centre 87 Mattock Lane, Ealing, W5 5BJ 8am to 12 Noon, Monday to Friday. Again you are welcome to join us there. This is the abortion centre which had at least 5 ambulances come during the last 40 Days for Life Campaign there and it also has a plaque of St Michael the Archangel on its wall, as a result of it's Christian history.

Why is BPAS closing the abortion "service"? They say they are amalgamating it with that of their Stratford branch. There is no word about dropping client numbers, or falling profits. I cannot pretend to know the reasons why the are choosing to stop abortions in Bedford Square.

I would imagine from my own experience with women, that they will lose a number of "clients" by this move. Abortion Centres have said in the past that as many as a third of their "clients" don't show up already. Women considering abortion often change their mind from moment to moment, and for some of them, the further they have to travel, the less likely they are to get there.

But whatever the human reasons for their move, I do also believe that the prayers, fasting, sacrificial giving of time and effort, have helped in removing this terrible industry from Bedford Square.
The fact that abortions will no longer go on at this site is a blessing. Praise be to the Sacred Heart of Jesus that this will be the last June that abortion will happen there.

Let's thank God, pray for those who aborted their children there, pray for the staff and the management and then move on in prayer to the next abortion site.